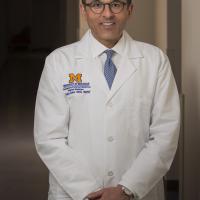 VA Ann Arbor Healthcare System / University of Michigan Health
Sanjay Saint, MD, MPH, MACP, is the Chief of Medicine at the VA Ann Arbor Healthcare System and the George Dock Professor of Internal Medicine at the University of Michigan. He is an international expert in patient safety with a focus on why some hospitals are better than others at preventing hospital-acquired complications. He has authored approximately 399 peer-reviewed papers with 119 appearing in the New England Journal of Medicine, JAMA, The Lancet, or the Annals of Internal Medicine. He serves on the editorial board of 7 peer-reviewed journals including NEJM Catalyst and BMJ Quality & Safety, is a Special Correspondent to the New England Journal of Medicine, and is an elected member of the American Society for Clinical Investigation (ASCI) and the Association of American Physicians (AAP). He has written for The Wall Street Journal and Harvard Business Review and has given a TEDx talk on culture change in healthcare. He has co-authored several books published by Oxford University Press including “Teaching Inpatient Medicine: What Every Physician Needs to Know,” and “The Saint-Chopra Guide to Inpatient Medicine (4th Edition).” He has also co-authored 2 books published by the University of Michigan entitled “Thirty Rules for Healthcare Leaders,” and “The Mentoring Guide: Helping Mentors and Mentees Succeed.” In 2017 he was awarded the National Health System Impact Award from the Department of Veterans Affairs, and the Distinguished Mentor Award from the University of Michigan. In 2016 he received the Mark Wolcott Award from the Department of Veterans Affairs as the National VA Physician of the Year and was elected as an international honorary Fellow of the Royal College of Physicians (FRCP). In 2019 he was named a Master of the American College of Physicians (MACP). He received his Medical Doctorate from UCLA, completed a medical residency and chief residency at the University of California at San Francisco (UCSF), and obtained a Master's in Public Health (as a Robert Wood Johnson Clinical Scholar) from the University of Washington in Seattle. He has been a visiting professor at over 100 hospitals and universities in the U.S., Europe, and Asia.